by
in Case Studies, Dubai
Reading Time: 10 mins read
A A
0 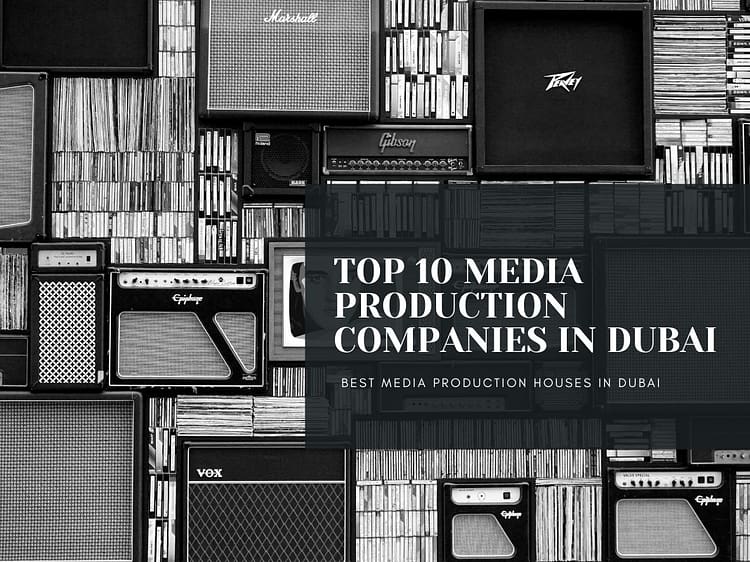 Every new and existing brand or business needs to highlight its services to stay in the loop of customer retention. And through the power of video, brands do get to showcase the best of what they’ve got to attract and engage more customers.

Here we have accumulated a list of the Top 10 Media Production Companies in Dubai. Take a look at which one should best suit your film/media production needs.

One of the known contenders in this list, Dot Motion is a media production company in Dubai that focuses on creating compelling corporate videos, social media videos, and other event-related video production services. This film production agency can be a good choice if you’re looking for a promising local production house (in UAE).

Studio 52 can be regarded as a key player in the film production industry as it claims to be providing its services since 1977. Putting huge emphasis on 2D/3D animation, this production agency offers services in regions such as UAE, Saudi Arabia, Oman, Kuwait, etc.

As per their website, they are soon getting to start offering film/media production services in Austria too. Apart from that, the team at Studio 52 also seeks to help out its clients by providing audio and photography-related services in the above-mentioned regions.

Rabbit And Carrot can be regarded as one of the leading production houses in Dubai. Primarily dominant in the corporate video space, the team behind Rabbit And Carrot is well-known for creating animated explainer videos for brands, entrepreneurs, startups, and enterprises. Along with that, this production house also offers digital marketing services to its clients.

But not just that, the team at Rabbit And Carrot also claims to be indulged in producing videos comprising of social ads, storytelling explainer videos, infographics, as well as live-action videos to cater to their clients. Talking about the clients that Rabbit And Carrot have worked with, names of some big brands such as Canon, Hewlett Packard (HP), Emirates NBD, and Shazam are displayed on this media production agency’s website.

Getting into the territory of some of the big contenders in the media production industry, this production house is known as Doleep Studios. This media agency focuses on creating cinematic videos for top brands in UAE.

This brand boasts a roster of top global brands that shows that the team behind Doleep Studios is here to stay and clients can rely on them to create compelling videos. Services that they include fall in the category of digital advertising, corporate video production, animated videos, etc.

As its name itself suggests, this video production company specializes in creating high-quality videos for brands throughout the middle east. Established in 2012, this production agency emphasizes giving out the best o their clients. With a team of experienced directors and filmmakers, Epic Films relies heavily on putting the potential of its crew to good use.

Things start getting a lot more serious when we get to this level of the top five media production houses in Dubai. And Void Studioz is one such contender in this space. Void is a multidimensional design studio that boasts of creating not only impactful videos but offering exceptional service to their clients both locally and globally.

The team behind Void Studioz excels mainly in 2D/3D animation along with corporate video production for commercials and infographics. This production house also holds a roster of giant corporate bodies from Dubai and showcases a strong portfolio of compelling and eye-pleasing videos to boost a brand’s value as a whole.

Founded in 2010 and staying afloat as one of the most promising video production studios in Dubai is an award-winning agency, Nomad Films focuses primarily on shooting TV commercials, documentaries, and branded content.

As far as the videos displayed on the website are concerned, the videos created by Nomad Films appear to be of high quality and do grab the viewer’s attention with eye-pleasing visuals. This team of filmmaking professionals holds a strong portfolio in the media production space and is known to provide the best quality video content to their clients.

Nomad Films actively offers its services in the regions such as Abu Dhabi, Dubai, and London.

Elevating the quality of video production inside out, these top three media houses are the key players in the industry. Joy Films is the first name that comes to our minds as the team behind Joy Films is known to dominate the space, especially in Dubai.

Joy Films brings more value to the table as they provide various exceptional services ranging from Illustrations to long-form video content that’s both engaging and award-winning. This crew of ambitious filmmakers happen to know their craft inside out and make sure to rely on their client satisfaction trait. This video production agency also boasts a list of corporate giants by creating remarkable video content. Their social media reach is over 3000 followers on Instagram and Twitter combined.

Staying true to its name, this video production company is well-known for creating cinematic video content for some of the biggest films in Hollywood too! Their website showcases some of their best work when it comes to getting an idea about what to expect from Buzzman as a client.

For this video production house to make it to the 2nd position on our list include their list of awards that they proudly display on their website. Too many to count! Buzzman claims to have worked on multiple viral campaigns for some of the biggest brands out there. These include Burger King, Ikea, Uber Eats, Boursorama Banque, etc. Having cast some of the most popular faces from Hollywood this crew of directors and cinematographers claim to not rely on just the names and faces of those movie stars. Such is the impact of this media production house dominating the space from the start of its formation.

Being established in 2010, this production agency has been shattering records in this space by winning the Best International Small Agency of the Year award and Advertising Agency of the Decade in 2020. Buzzman also has a massive following of over 59 thousand followers on Instagram and Twitter combined.

Right from the moment you visit their website, you are welcomed with eye-catchy and compelling visuals enough to let you know that this production house is here to stay and dominate. With the mindset of helping brands sustain, grow, and explore; this video production house provides several promising services such as animation, TV/digital commercials, still photography, and visual content.

As the idea behind Milkshake Media is focused on brand-building this team puts a strong reason on why any client should put their trust in them to carry out the job. Focusing on churning the most out of the budget and providing the right deal to every client is what puts Milkshake Media way ahead of its competition.

The team behind Milkshake Media comprises creative producers and skilled directors who know their way out of every client’s expectations and deliver the best of services. Starting in 2008, this video production agency dominates two of the most business-centric regions such as Dubai and Mumbai. As an ever-growing media agency, its social media reach consists of about 2000 followers on Instagram.

So, this was our list of Top 10 Media Production Companies in Dubai. Please note that the entries in the list are based on following a realistic approach thus measuring these agencies in terms of the value provided to the clients.

1. How much do video production houses charge?

It depends on several factors. Video production agencies usually have a standard hourly rate at which they operate on. Plus, it depends on the budget that the client has set in order to get the job done. Lastly, the amount of time it will take to complete the entire video production if there are multiple scenes where the script demands more effort than usual.

2. What is the video production process as a whole?

The video production process is divided into three stages:
Pre-production: This is the stage where the research is carried out. Video production agencies lay down the client’s expectations under different segments. The entire plan of action is then executed.

Production or filming: This is the stage where the actual filming of the video takes place. Scenes, scripts, dialogues, everything that was first prepared in the pre_-production stage is now put to work.

Post-production: This is the stage where the changes are executed to enhance the overall quality of the footage. Where the actual final piece is crafted and shown to the client for review. Once everything is sorted out, the video or the finished product goes live.

3. What type of equipment do production houses use?

It depends on the amount of effort that’s to be put in order to execute the task at hand. The gear/equipment ranges from professional 4K cinema cameras, drones, and light kits to smaller and compact digital SLR cameras.

How to do Gambling SEO? (Complete Guide)

How Digital Marketing Can Help a Business Grow?

Mobile app development today is one of the most sought-after industries. That said, these days, a website is not enough...

We use cookies on our website to give you the most relevant experience by remembering your preferences and repeat visits. By clicking “Accept”, you consent to the use of ALL the cookies.
Do not sell my personal information.
Cookie SettingsAccept
Manage consent

This website uses cookies to improve your experience while you navigate through the website. Out of these, the cookies that are categorized as necessary are stored on your browser as they are essential for the working of basic functionalities of the website. We also use third-party cookies that help us analyze and understand how you use this website. These cookies will be stored in your browser only with your consent. You also have the option to opt-out of these cookies. But opting out of some of these cookies may affect your browsing experience.
Necessary Always Enabled
Necessary cookies are absolutely essential for the website to function properly. These cookies ensure basic functionalities and security features of the website, anonymously.
Functional
Functional cookies help to perform certain functionalities like sharing the content of the website on social media platforms, collect feedbacks, and other third-party features.
Performance
Performance cookies are used to understand and analyze the key performance indexes of the website which helps in delivering a better user experience for the visitors.
Analytics
Analytical cookies are used to understand how visitors interact with the website. These cookies help provide information on metrics the number of visitors, bounce rate, traffic source, etc.
Advertisement
Advertisement cookies are used to provide visitors with relevant ads and marketing campaigns. These cookies track visitors across websites and collect information to provide customized ads.
Others
Other uncategorized cookies are those that are being analyzed and have not been classified into a category as yet.
SAVE & ACCEPT